Bangladesh - one of the fastest-growing economies in South Asia got her independence in 1971 after the 9-month-long Liberation war. Bangladesh has made remarkable progress in raising incomes, reducing poverty and improving social indicators and has been classified as a middle-income country by World Bank. Bangladesh belongs to the largest river delta as well as one of the most fertile regions of the world with a total area of 1,47,570 sq. km. and a coastline of 710 (check) km. It has a population of 166.50 million (Economic Review 2020), making it one of the most densely populated countries of the world. Bangladesh is largely ethnically homogeneous. Over 98 percent of the people speak in Bangla. English is widely spoken as well. The country is covered with a network of rivers and canals forming a maze of interconnecting channels and rich waterways. 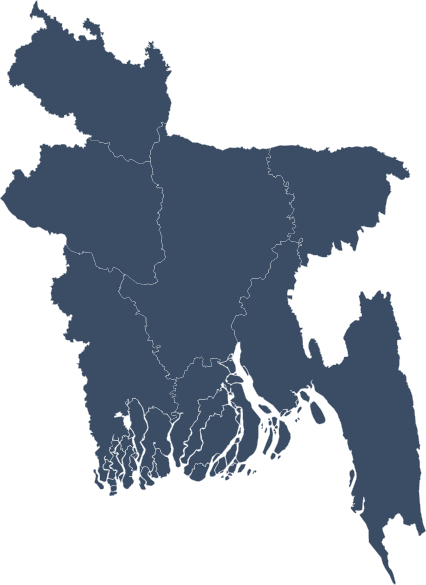 The Government of Bangladesh has given utmost priority to improve the connectivity across the country with a view to easing the doing business in the country. Keeping this view in mind government has taken numerous mega projects. The most economically significant is the Padma Multi-Purpose Bridge. This will be the largest bridge in Bangladesh that extends to nearly 7 kilometres and will connect northern and southern Bangladesh.

With this project, Bangladesh has shown the world the degree of self-reliance it can afford and its capability to launch mega economic projects without any support from abroad.

The Padma Bridge is estimated to increase the GDP by more than 1%. It will benefit about 30 million people across 21 south-western districts of Bangladesh.

The transport system of Bangladesh consists mainly of three modes. As the country is a flat plain, all three modes are of surface transport, i.e. roads, railways and inland waterways which are widely used in carrying both passengers and cargoes. Besides, operations of two seaports, maritime shipping and civil aviation catering for both domestic and international traffic are extensive and effective.

We’ve committed and devoted resources of sustainable utilities infrastructure that goes from having powerful, reliable and extensive energy supply network (both from traditional and renewable sources of energies such as geothermal, bio-gas, solar panel etc.) to promoting the establishment of strategically located industrial parks and business centres.

In the last decade Bangladesh with its sustained economic growth, has managed to continue growth in overall communication sector. About half of the total population use internet. Bangladesh has experienced a surprising growth in mobile phone subscriptions which is about 170.41 million as of end of June 2021. The total number of internet subscribers have reached 120.96 million at the end of June 2021. The urban and rural area are well connected due to the phenomenal initiative of the digital friendly government.

Bangladesh is bringing about major improvements to the country’s infrastructure, highways, airport, seaport and telecom etc.to facilitate the foreign investors. The infrastructure of the investment friendly country is furnished below:

Bangladesh is bringing about major improvements to the country’s infrastructure, highways, airport, seaport and telecom etc.to facilitate the foreign investors. The infrastructure of the investment friendly country is furnished below:

In Bangladesh, among the various modes of transport road transport system has been playing a significant role in transporting passengers and goods. The Roads and Highways Department (RHD) manage several categories of road.

RHD has total length of 20,948 Km Road under its control which connectsthe every corner of the country.

There are now 13 operational airports and Short Take-off and Landing (STOL) ports in Bangladesh. These are Dhaka, Barisal, Chittagong, Comilla, Cox’s Bazar, Ishurdi, Jessore, Rajshahi, Syedpur, Sylhet and Thakurgaon. Of these, the airports at Dhaka, Chittagong and Sylhet serve international routes. Air cargo and STOL services have been handed over to the private sector by the government.Bangladesh can be reached by air from any part of the world.

The Bangladesh Railway connects important cities and places of interest such as Chittagong, Sylhet, Khulna, Mymensingh, Bogra, Rajshahi, Dinajpuir starting from Dhaka. The inter-city Express Service is available to and from major cities at cheap fares.

The entire coast along the Bay of Bengal is 710 km long. There are two major ports in the country. Chittagong, the oldest port, has been an entry-port for at least 1,000 years. The Mongla port in Khulna region serves the western part of Bangladesh.

Dhaka-Chittagong River route is 280 km long in which the length from Dhaka to Munshiganj is 30 km and from Munshiganj to Chittagong is 250 km. According to BIWTA report 2016.

There are two major ports in the country. Chittagong, the oldest port, has been an entry-port for at least 1,000 years.